Review: The Death and Life of Great American Cities 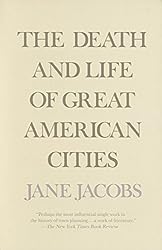 Buildings are an important part of the success of cities - naturally, architects are interested in the urban condition. In The Death and Life of Great American Cities, Jane Jacobs provides a critique of 20th Century urban design ideas. She advocates for the city to remain diverse, and somewhat gritty, instead of being cleansed and formalized like what was advocated for by many city planning authorities in the mid-1900s.

Interestingly, Jane Jacobs was not trained as an urban designer, planner, or architect. Her observations come solely from her experiences living in and visiting cities. Most of her observations surround New York City, Boston, Philadelphia, and San Francisco. Her thoughts are expressed in a simple and clear manner that could only come from a non-architect, however, Jacobs is by no means a concise writer.

Many of the ideas that Jacobs puts forth may be considered common sense, but those ideas were as important in 1961 as they are today. For instance, Jacobs claims that the key to safety in a city is having active streets so that people are interested in watching the street for entertainment - this is her "eyes on the street" principle that seems so obvious. However, as with many of these ideas, it cannot be "designed" directly - getting eyes on the street requires a mesh of many variables including street width, building edges, diversity of services, public policy, etc. The final chapter of the book speaks to the need to account for many variables because enacting one or two ideas will never work.

To be sure, there are criticisms of Jacobs's manifesto that should be studied by urban designers and architects. For example, many of her ideas are linked to the spread of gentrification in the cities she describes. In fact, Jacobs talks about Boston's North End as a the worst slum in the city, but today the North End is far from a slum - it may even be considered somewhat gentrified. Obviously, many of Jacobs's examples have evolved (or devolved) since the book was written in 1961.

The Death and Life of Great American Cities is most definitely a book that deserves to be on the shelf of every architect. In 1961, the book successfully challenged popular notions of city design and revitalization, including Urban Renewal. It is historically important for its role in convincing designers and politicians to rethink planning policy. Today, the book serves as a reminder of what makes cities successful and also what creates unsafe and displeasing environments.

Help make Archtoolbox better for everyone. If you found an error or out of date information in this article (even if it is just a minor typo), please let us know.

The Archtoolbox Guide and Templates for Developing a Fee for Architectural Services.

Our list of the top reference books for architects. These are the ones we have on our shelf.